Come and read my blog

Reading My E-commerce blog is an anodyne makes you feel good. This blog contains the latest updates and development on e-commerce and Internet related development and information meant for sharing with my readers.

Among the interesting topics are e-commerce business models, e-government, Internet security, ethical issues, e-tailing and many more categories. There will be more categories or topics to be added in the blog such as social networking tools like Twitter and Facebook related news, e-learning applications and many more.

Another discussion topic is the E-Commerce revenue models which specifically describe different techniques used in generating income from the publisher's websites. As the e-commerce progress, the traditional revenue model of sales is expanded to more variety of revenue options and e-commerce business model. Among the revenue models are sales, advertisment fees, affiliate fees, subscription fees and transaction fees.

During one of the trimester, I actually designed an assignment which required my students to produce blogs on topics related to e-commerce.The main purpose of the blogging assignment is to introduce the blogging culture among my students and at the same time trying to see whether the application of the blogging assignment will helps them to enhance their understanding on learning the subject of E-Commerce. All together there are 120 blogs being created (99 from accounting majors and 21 from entrepreneurship majors).

In the first court action taken by Australian Communication and Media Authority against unsolicited SMS messages, 2 companies and 3 individuals were fined with a total of A$15.75mil (RM49.14mil) for contravening the Spam Act.

The fines were handed down in the Federal Court in Brisbane on Friday.

Mobilegate Ltd and Winning Bid Pty Ltd were found to have contravened the Spam Act and the Trade Practices Act 1974 in August 2009, the Australian Associated Press reports.

The case was the first court action taken by the Australian Communications and Media Authority (ACMA) against unsolicited SMS messages.

ACMA acting chairman Chris Cheah said it was a significant outcome for all mobile phone users.

"The maximum penalties provided for under the Spam Act are very high," he said.

"The substantial penalties imposed by the court in this case show that spam will not be tolerated in Australia." - Bernama

Other posts related to online scams, cheatings and legal issues are:

The Star reported that at least 66 people were cheated almost RM73,445 when they performed online purchases of skincare products such as facial and eye masks with "BigPussyCat" website.

These people were tempted by the cheaper prices of the products offered as compared to the market rate or over the shelves.

KUALA LUMPUR: At least 66 people paid the price for their ignorance when they were cheated of their money after making Internet purchases of skincare products from someone named “Big Pussycat.”

The victims made online transfers amounting to RM73,445.10 for the products which came under names such as “My Beauty” and “My Sherman Beauty” that had been advertised on “Big Pussycat’s.” website

Salesman Chong Wei Lun, 29, made purchases totalling RM2,910 for his girlfriend on May 4 but the products never arrived.

“The price of the items was cheaper than those off the shelf,” he said as he explained why he was lured by the advertisement.

Chong was one of the 11 dissatisfied customers who turned to MCA Public Services and Complaints Department head Datuk Michael Chong to voice their grievance.

At a press conference yesterday, another victim Winnie Tan, 20, said she discovered that she had been ripped off only after her friends told her to do a more thorough check on the advertisement.

She saw website postings warning people that the sale of the skincare line was not genuine.

Michael Chong advised the public, especially young people, to be more cautious when buying goods featured on the Internet, adding that he would submit all the complaints to the police. 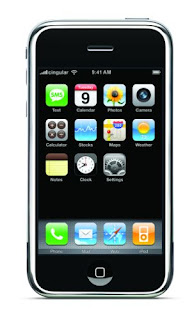 A prestigious Japanese university, Aoyama Gakuin University is giving out free iPhone 3G to its 550 students from the School of Social Informatics.

The main purpose of this idea is to use the iPhone, equipped with the GPS systems, to trace the whereabout of the students as a mean to check their attendance. Of course, the iPhone will also be used as a tool for their studies such as searching for course materials uploaded, lectures videos and tests. It is also hope that new iPhone applications can be developed by the students.

Universities used to give out free laptop, free webcam (especially for e-learning programmes) and now iPhone. I believe this is a very good move as it helps to bring out more creative applications designed by the fresh mind of the young users, which in turn will benefit others as well. I do hope that more educational institutions will take up such initiatives in the very near future, not just merely using it to nab the truants but more on creating the space and avenue for more new applications.

The outbreak of the AH1N1 virus has triggered the fear of another deadly flu virus like the previous SARS or even the deadly Spanish Flu which killed 40 million people.

BBC News has come out with a day-to-day WHO outbreak map to put into visual on how the virus spread throughout the world. Click here to view the full map. 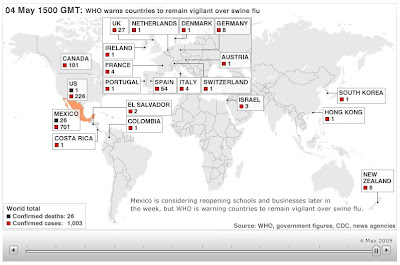 Hope that this pandemic will stop and cured in the shortest time that is possible.
at Tuesday, May 05, 2009 No comments: Links to this post

Personal Details for sale - $0.10 per record

Beware when you starts to receive multiple sales calls from nowhere or some commercial sms. This could be due to the fact that your personal data has been compromised by some of the companies.

The Star run a special report on the individual data protection issue on Sunday, 3rd May 2009. These are some of the except:

"KUALA LUMPUR: For a mere 10 sen, your personal data are being sold to unauthorised bodies. A list of 1,000 entries containing names, handphone numbers, type of credit card owned and issuing banks, and place of work costs only RM100.

If you regularly receive unsolicited sales calls, messages or e-mails, then in all likelihood, your data have been collected and sold to third parties.

With such baseline information in the hands of the unscrupulous, more particulars could easily be gathered and your identity stolen – for transactions and the purchase of goods or services without your knowledge.

The fact is any database is vulnerable – from loyalty cards and telecommunications companies to housing developers to members-only clubs – and there will be a demand for it as it represents a list of potential customers.

An entry from a database of an exclusive club comprising Datuks and Tan Sris, for example, could fetch RM3 each and resold for RM4."

This is really frightening that individual personal information such as banking and contact information can be obtain so easily. The most worrying part is the possibilities of the data to be misused by those irresponsible parties such as applying bank loans, credit cards, or even from the shark loan. Something has to be done by all parties to protect the customer's privacy.